2013 Detroit NAIAS: Return of the Stingray 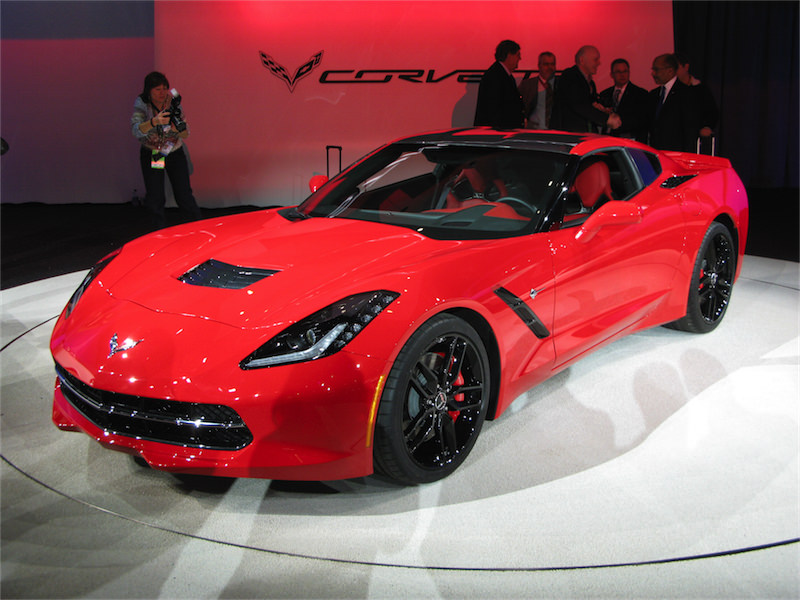 Chevrolet has used the North American International Auto Show (NAIAS), aka the Detroit Auto Show, as the launch venue for many new models including Corvettes.  The star of this year’s show was the 2014 Corvette, the first of Corvette’s seventh generation.

Media days at the 2013 NAIAS started Monday, January 14th.  Chevrolet staged a private showing for the new Corvette, a “reveal” in Chevy speak, the previous evening at the Russell Industrial Center a few miles from NAIAS’s Cobo Hall.  WIth journalists in from all over the world, the logistics were perfect.  But it took more than media credentials to gain admission.  I don’t know Chevrolet’s criteria, but was told this was one tough invite with requests double the space available.  Four-hundred enthusiasts bought their way in through a National Corvette Museum fund raiser at a cool $999 each.  Counting rows, I ball parked the attendance at about 1,000 seated and another 500 standing.  I overheard a conversation after the reveal that claimed the event was planned for 1,200, but 1,500 showed up and some GM employees were asked to leave to make room.  Secondhand, but that did square with my rough estimate.

Admission to the reveal started at 6:00PM.  A loop of film ran on a big screen showing classic Corvette movies and photos, everything from Duntov in the fifties to the latest C6-R racing footage.  It also included clips of Tadge Juechter, Corvette’s current Chief Engineer, and Ed Welburn, GM’s Vice President of Global Design.  Each talked about the new car, its development and special features.  Both men came across extremely well, also the case in person.  At 7:00PM, the “press conference” began, handled by Mark Ruess, GM’s North American president.  A covered car on stage was actually a light-show prop used to demonstrate designers’ attention to airflow around, over and through the 2014 model.  Eventually a Torch Red 2014 coupe rolled onto the stage.  Well received is understating it.  This was an enthusiast crowd, many of whom had Corvette linkage beyond mere media curiosity.

After the formal presentation, numerous food and beverage stations opened.  Off to the side of the main presentation hall was another area with a Cyber Gray 2014 coupe, and displays of the frame, engine, transmission and other components.  Corvette engineers and managers were there to field questions.

The following morning, GM had the 8:35AM time slot at NAIAS for the formal media debut.  Global Product Development Senior Vice President Mary Barra spoke briefly about the Cadillac ATS’s selection as North American Car of the Year, then moved on to this show’s big news, the Corvette.  Mark Reuss again spoke.  GM’s show area was packed with people, but the presentation was surprisingly brief. The 2014 Corvette could speak for itself.  The same two cars and displays from the previous evening’s reveal had been moved during the night to the show, and the both cars were mobbed the entire day.  The display also included a representative of each previous generation, all with white exteriors.

Permit me to speak first about this new Corvette and its features.  Then I’ll add my personal impression.  This is from someone who has been hanging around the Corvette scene perhaps a bit too long.  I started attending Corvette media events in the late seventies.  I was at Riverside in late 1982 for the media debut of the 1984 C4, at Yosemite for the return of the 1986 convertible, at the National Corvette Museum for the 1997 C5 reveal, and at the Detroit Opera House for the 2005 C6’s first curtain call.  That last one was also timed to align with the NAIAS, but was considerably smaller in scale.  Chevrolet anticipated, correctly, that C7 interest demanded a bigger stage.

The C7 Corvette is new.  The engine, the chassis, the body...all new.  Yet it is evolutionary.  No one will mistake it for anything but a Corvette and no one will mistake it for an earlier Corvette.  This is likely the designers’ precise intent.  Moving the transmission to the rear starting with the 1997 C5 created a balanced platform on which to build.  Short of going mid engine, this and future Corvettes will evolve, not revolutionize.

The exterior of the C7 has a lot going on.  There are five functional air vents, intended either for component cooling or air flow management, one in the hood and one in each front and rear fender.  Vents trims are plastic, painted Carbon Flash gray.  Carbon fiber hoods and liftoff roof panels will be included with all 2014s as base equipment.  The standard configuration will have both painted body color, but the roof panel can be optioned in natural, clear-coated carbon fiber.  A transparent poly carbonate roof panel will be optional as before, both stand alone and grouped with the painted or natural-finish pieces.

Details of the C7’s base engine, the aluminum block and head 6.2 liter (376-cid) LT1, were released several months earlier.  It is the fifth generation refinement of the two-valve per cylinder V8 that base Corvettes have employed since 1955, but its power output, fuel economy and emissions are sure to be world-class.  Exact ratings aren’t locked in, but expect the new engine to reach 450 hp and 450 lb-ft torque, sufficient for sub 4-second 0-60 mph times.  With direct injection, variable valve timing, and cylinder deactivation, fuel economy should be stellar.

An aluminum frame will be included with all C7 Corvettes, unlike C6 when it was limited to Z06 and ZR1.  But it does not replicate the C5-C6’s one-piece hydroformed side rail.  The C7’s frame rail section is five pieces, welded or bolted together.  Engineers told me the five-piece setup gave them more design flexibility, including using different gauges as needed.  At first glance, it looks similar overall, yet it is totally rethought.

The combination of carbon fiber and the aluminum chassis resulted in a weight reduction of just under a hundred pounds, but engineers were careful to note that extra weight added in other places will negate at least some of that.  Again, no final numbers, but expect little change in curb weight.

The six-speed automatic transmission carries over with minor changes, but the manual is a new seven-speed unit sourced from Tremec.  The big news here is something Chevy calls “active rev matching” which blips the throttle between shifts, up or down, to match engine speed with the next gear.  Prefer to do your own heel and toe?  No problem.  The feature can be turned on or off with steering wheel controls.  Anything that results in more buyers opting for manuals is fine by me.

The C6 got relentless media criticism for its seats, and for generally poor interior material quality.  Seems like once some scribe leveled these gripes, it became a template for every writer to follow.  As I digested these C6 reviews over the years, I kept asking myself why none of these guys mentioned the Corvette’s instrument display, for my money the hands-down best in the business.  Interior materials could have been better, sure, but the overall design was first rate.  C7 Corvette interior designers responded with a pair of completely new, magnesium-frame seats.  The base is the GT, optional is the Competition Sport with higher bolsters and slots for racing-style shoulder harnesses.  Both will feature heating and cooling in up-level packages.  We weren’t allowed to try the seats.  A short, static test proves nothing anyway.  They certainly look impressive. The seats are supplied by Lear...a rumored Recaro option is not available, at least not yet.

Both display cars had top-of-the-line (3LT) interiors with carbon fiber, aluminum, micro suede, and stitched leather appointments.  Chevrolet made a point of emphasizing the interior materials are real.  If it looks like carbon fiber, it is.  If it looks like aluminum, it is. Two 8-inch display screens are included, one in the center console stack, the other a reconfigurable one in the center of the instrument cluster.  Although I’m not certain how less expensive interiors will be outfitted, this redesign should silence the criticism.  I’ll bet from the reveal forward the new review template will be positive.

Now for my personal take.  My first exposure to the C7 was the Torch Red stage car.  It has a dramatic stance in profile, just beautiful.  It’s somewhat generic in front, uniquely aggressive in the rear.  Some will compare the squared twin taillights to Camaro’s, but it’s a current Chevy theme and doesn’t bother me a bit.  The surfacing is crisp, more so than C6 which was more so than the ultra-smooth C5.  But the new car did strike me as being too busy.  It had the natural carbon fiber roof panel which reads as black from a distance, plus the vent grills in dark gray, and black wheels.  A bit much.  In his coverage of the NAIAS for the Wall Street Journal, Sam Neil, a fantastic writer whose columns I savor, said he started referring to the Corvette as the Cor-vent.  As an aside, while Mr. Neil wasn’t crazy about the exterior, he wrote the real news was inside and the C7’s interior “would do credit to an Audi R8.”  The industry generally considers Audi to be numero uno for interior design and quality and the R8 is Audi’s top of the line.  So high praise indeed.

Even though Torch Red is my all-time favorite Corvette exterior, I preferred the Cyber Gray C7 display car because its body color blended with the vents and roof, and toned the whole thing down.  I’d prefer scoops without vent trim...that’s probably not going to happen.  But if Chevrolet doesn’t offer simpler, body-color vent inserts, the Corvette after market will.  So let’s not overstate this vent business.  The visual disruption of body surfaces by the vents can be addressed by Chevrolet or by owners.  The overall design is excellent.

When the red car rolled onto the stage, I immediately noticed side windows behind the door glass, a Corvette first.  I thought, great, that will really help outward visibility, a pet peeve of mine.  But on closer inspection, the transparent area of these windows is tiny.  And the C7’s big rear window is more narrow than in pervious C4, C5 and C6 coupes.  More body material and less glass in the hatch means less weight, but rear visibility out of C7 coupes won’t be as good as the three previous generations.  It’s a trend one sees these days as manufacturers add rollover protection.  But that alone doesn’t excuse it.  With cars like the Corvette and Camaro, exterior design simply takes precedence.

Since its humiliating bankruptcy in 2009, GM has returned to record profits in North America, yet holds less than 18% of the domestic market, a share not seen since the thirties.  Part of its plan to regain share is to boost Chevrolet’s sales here and abroad.  Corvette sales and profits don’t amount to beans in the big picture, but Chevrolet marketing VP Chris Perry understands the Corvette’s “halo” effect on the Chevrolet brand and plans to exploit it as never before.  So look for Chevrolet to put the Corvette front and center as it rolls out new products at an unprecedented pace over the next two years.

Front and center.  Right back where it belongs.