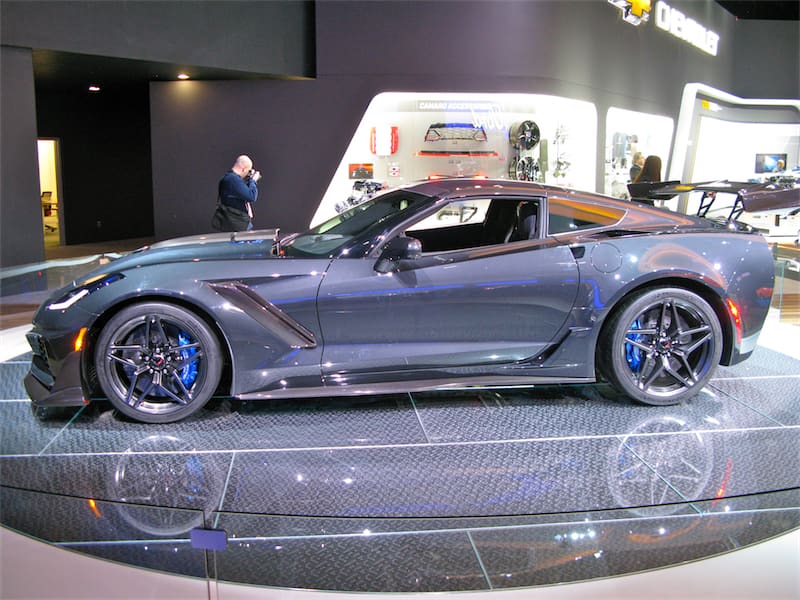 Revealed at Dubai’s Motor Show November 12, 2017, and in Car and Driver’s December 2017 issue, Corvette’s 2019 ZR1 was still a star attraction at Detroit’s North American International Auto Show (NAIAS) held in January 2018.  The show spanned sixteen days:  January 14th and 15th for media, 16th and 17th for industry, 18th for a charity event, and 20th through 28th for the public.  In previous years, GM held one of the early press conferences the first media day.  But press conferences were scarce this year and no GM division even held one.  On the Saturday before the show opened, GM did have an invitation-only, off-site event to unveil its new Chevrolet and GMC full size pickups.  I arrived mid-afternoon of the first media day, spent the night, then came back for a less-crowded second day photo shoot.

In addition to conferences, also almost completely extinct were the lavish press kits of years past.  Those gave way to CDs, then to thumb drives, then to the current sad state of affairs where company reps hand journalists a business card with a web address.  I have a couple of decades of press kits stashed away...maybe they’ll fund my retirement.

Fifty two vehicles made their world debut, seven made their North American debut, and 10 special one-of-a-kind vehicles made their first appearance.  According to show officials, this NAIAS attracted 5,078 journalists from 60 countries for the two media days.  Following were 40,000 “experts and innovators” from 2,002 companies for the two industry days.  NAIAS says it’s the only North American car show with days dedicated to industry.  Public attendance over nine days was 809,161.  Not a record, but close.  To see how this compares with other big car shows around the world, see my 2014 NAIAS coverage.

We can all agree NAIAS is important. Detroit is home to our big three domestic manufacturers and this show is the first major auto event each new calendar year.  January weather in Michigan can be brutal, but Michiganders pretty much drive the same speed in any weather, love their cars, and need little excuse to blast down to Cobo Center to see some new ones in a warm, comfy environment.  So with all NAIAS has going for it, why didn’t Chevrolet use this venue to debut the 2019 ZR1? And why end 2018 Corvette production in late January after less than 10,000 units had been built?

The elephant in the room is the mid-engine Corvette, aka the Zora.  When rumors started circulating a few years back, my thought was that I had heard this tune before and I’ll believe it when I see it.  I haven’t seen it, but I do believe it.  Chevrolet is confirming nothing and has done an admirable job of keeping a lid on its plans.  To be clear, I am not in the loop.  Other than tell me 2019 production was moved forward to accommodate the ZR1, and that 2019 will be a “normal” production cycle, I haven’t been told beans.

Internet chatter is already claiming to know the three power plant choices for the mid-engine.  Engine release data generated within GM could leak, so maybe.  Speculation also has the C7 continuing in production alongside the mid-engine C8.  This scenario suggests a base C7 in the $50K range, with the mid-engine likely a low volume special, probably in the $150K+ range.  Again maybe, but I don’t think so.  There is absolutely no reason a mid engine C8 could not have the same price structure as the current car.  If it was my call, the C7 would end with the 2019, and the 2020 mid-engine C8 would stand alone.  And I’d bring the mid-engine in at a lower base price than the outgoing car.

Crazy?  I attended the media preview of the C4 Corvette at Riverside Raceway in California in November 1982.  Bob Stemple was Chevy’s GM and he was peppered with questions about how much this vastly improved, completely new model’s price would increase.  He was non committal, but hinted it might drop.  And it did.  The 1984’s base price came in at $21,800 compared to the 1982 Collector Edition’s $22,537.59.  That’s the only fair comparison since the Collector Edition was a hatch, comparable to the all-hatch ‘84s.  It’s doable.  Corvette’s 1984 production ramped up slowly and the waiting lists were the longest since Split Window days.  GM overpriced the original Volt and severely overpriced the gorgeous Volt-based Cadillac ELR, effectively killing it.  A new mid-engine Corvette with the price structure of the current car will sell 40,000 units annually for a decade.

Production of 2019 models started January 29, 2018, the same day 2018 production ceased.  As I write this in early February, production of  ZR1s has not yet started, but is slated for March (the Detroit ZR1 display car was a hand built unit with an “EX” VIN).  As mentioned, my GM contacts tell me 2019 production was brought forward to accommodate the ZR1, and 2019 will be a “normal” production cycle.  Did normal mean through mid-calendar year 2019?  Answer.  Yes.  Chevy will not even confirm the existence of the mid-engine, but I predict it arrives as a 2020 model in late calendar year 2019.  That suggests a mid-engine debut at next year’s January NAIAS.  To me, this all lines up as the mid-engine C8 simply replacing the C7.  I don’t understand why 2018’s production year had to be cut short so the ZR1 could arrive as a 2019.  Could it not have been a 2018?  There must be a good reason.  I just don’t know what it was.

As for the ZR1, it is the most powerful car GM has ever sold to the public.  Its supercharged direct and port injected LT5 engine produces 755 horsepower and 715 lb-ft of torque.  Zero to sixty times are under three seconds, top speed is 212 mph, and quarter mile speeds push past 130.  This is astonishing for an off-the-showroom-floor vehicle and nothing in the ZR1’s $120K base price range will come close.  A true chameleon, Chevy engineers promise a race tuned monster on track day, but a perfectly docile country club tourer the rest of the time.  For the country club set, the ZTK package should be avoided if for no other reason than easier access to the luggage area sans wing.  You know... golf clubs.

In simple terms, the ZR1 is a Z06 with more down force, especially with ZTK, and more power.  The main power bump comes from a huge Eaton supercharger (52% more air than Z06) that adds considerable height to the engine.  The extra height is readily apparent in the taller hood which rules out sales to the European Union as it doesn’t meet pedestrian impact safety rules.  Chevy doesn’t care.  No compromises here.  Car and Driver’s article quoted Corvette Chief Engineer Tad Juechter as saying “it’s the most we know how to do.”

Alongside its two Corvettes, Chevy had a cutaway display of the ZR1’s LT5 engine. It is a thing of beauty and perhaps the last of its breed.  I’ve included several photos for savoring.

Before NAIAS starts, a panel of auto journalists votes on car, utility and truck of the year.  This year honors went to Honda Accord, Volvo XC60, and Lincoln Navigator, all logical choices.  What, no Silverado?  In order to be nominated, vehicles have to be in production available for purchase.  So the 2019 Chevy Silverado and GMC Sierra will be eligible next year and will likely win.  Both trucks are a couple inches longer and have sleeker styling with a distinctive character line running through the bed side into the door.  But the big changes are on the engineering end.  A new system Chevy calls Dynamic Fuel Management can shut off up to seven cylinders in the V8s in a variety of combinations for significantly improved fuel economy.  Despite the extra length, the trucks shed as much as 450 pounds.  Unlike Ford’s use of aluminum in almost all body panels, GM has opted for aluminum only in hinged panels (hood, doors, tailgate), staying with steel in all fixed panels for rigidity.  Steel companies are fighting back with higher strength formulations that permit thinner and lighter steel panels.  Eighty percent of the new truck’s frame is high strength steel.  And yes, the bed remains steel.  It better after those Chevy commercials showing Ford’s aluminum bed shortcomings.  With cool new bed storage bins and a power tailgate, these new GM trucks should fare well in the marketplace.  Enough to overtake Ford?  Probably not.  It used to be that Silverado and Sierra combined exceeded Ford full size truck sales, but no longer.  Ford owns this segment.  But GM’s trucks contribute mightily to its bottom line, and that will at the least get a nice boost from these re-engineered, re-designed gems.

After the Corvettes and trucks in the photo section, you’ll see an overview of FCA’s display, some shots of the completely redesigned Jeep (very well done), the Bullitt Mustang that commemorates the 50th anniversary of Steve McQueen’s classic with moviedom’s all time great car chase.  No matter how many times I see it, the shot of McQueen’s Mustang popping up in the Charger’s rear view....

Following the Bullitt, there’s a shot of Ford’s new mid-size Ranger pickup.  Ford’s been selling these in other markets for several years, but brought it here following the success of GM’s mid-size Colorado and GMC Canyon.  I dropped in a shot of Kia’s new Stinger rear drive sedan, aimed squarely at BMW.  Handsome and getting good press, but automatic only.  The silver jewel on the turntable is a prototype of Honda’s new Insight Hybrid.  In its category, I think the 2018 Honda Accord is back on top with handsome styling and superb drivetrain options, including a six-speed manual.  But if the production Insight looks close to the concept...wow.  Compared to Prius styling...well, forget that.  No comparison.

Following the Insight is a shot of Guangzhou Automotive Group’s (GAC) corporate display, the first time a Chinese manufacturer has set up on the main floor at NAIAS.  Somewhat generic designs, but all bases well covered.  They plan to be selling in the United States by 2019 starting with a Toyota Highlander class, three-row SUV.  And finally, my Mercedes EQA design choice.

All in all, a fine show.