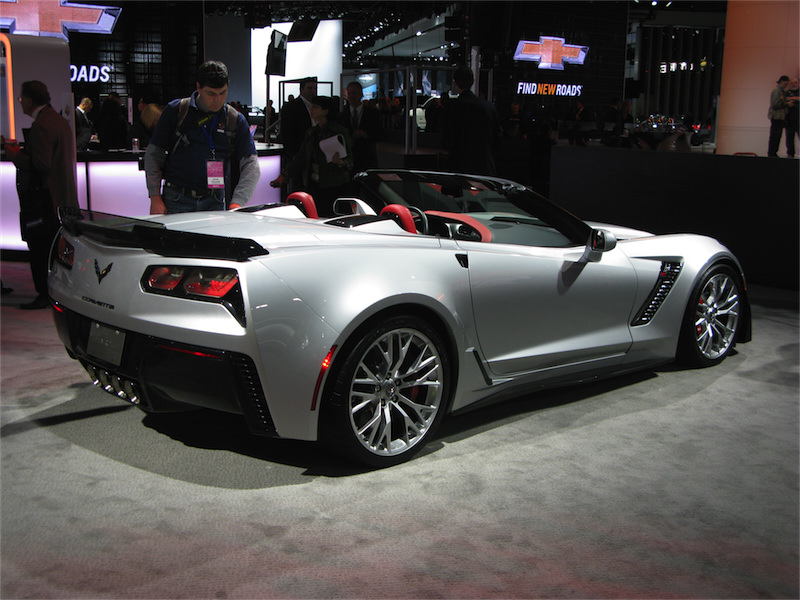 Winnipeg weather aside, 5000+ auto writers rolled into Detroit’s North American International Auto Show (NAIAS) for media days on January 12th and 13th.  Attendance for the January 17th-25th public show topped 808,000, an increase of 5,000 over the previous year which itself was the best in a decade.  Crude oil’s 50% drop during the second half of 2014 shifted customers to more profitable trucks and sport utilities.  But not all was rosy.  Sales in China cooled.  Russia’s economy tanked with oil’s decline and sanctions following Putin’s Ukrainian land grab.  Europe’s economic woes continued.  But here in the United States, vehicle sales hummed along nicely and the vibe at this year’s show was decidedly upbeat.

Corvette was the darling of the 2013 NAIAS when the 2014 Stingray was revealed.  And Corvette did its fair share last year with the Z06.  But for 2015, Corvette took a break.  Chevrolet brought three Corvettes, a Daytona Sunrise Orange coupe, a Shark Gray convertible, and a Blade Silver Z06 convertible.  Cutaway displays for the LT1 and LT4 engines and the new eight-speed 8L90 automatic transmission were close by.  So nothing debut-new, but anything Corvette draws plenty of lookers.  Still, this was the year for other models to grab the headlines, and some of this show’s fifty-five “reveals” did just that.

North American Car of the Year, as voted by a panel of fifty automotive journalists, went to the VW Golf, a mild surprise.  Truck of the Year went to Ford’s new aluminum-body F150, a game changer and no surprise.  AutoWeek gave its Best in Show to the Ford GT, a mid-engine, mostly carbon fiber body stunner of a prototype slated for production later this year.  Powered by a 600+ V6, this is the spiritual successor to the original GT40 that won the 24 Hours of LeMans fifty years ago.   No prices were announced, but AutoWeek guessed in the $200-300,000 range.  Manufacturers generally use their show space at Cobo Hall for reveals, but Ford used the adjacent Joe Louis Arena, where the Red Wings play hockey, to unveil the GT.  Ford CEO Mark Fields and Executive Chairman Bill Ford shared the stage.  The Shelby GT350R Mustang also debuted at NAIAS,  but the GT was the undisputed star of this event.

AutoWeek’s Most Fun went to the Ram Rebel, Chrysler’s version of Ford’s Raptor.  This is a niche Chevy doesn’t currently address.  Most Significant was the Volvo S60 Inscription.  It’s not the car so much as that this is the first volume car from a major automaker built in China and on sale in the US.  Up until now, China’s Volvo owners have been content to ship Swedish-built Volvos here.  The Best Concept was given to the Buick Avenir, a big, beautiful four door sedan that has a decent chance of seeing production.

Buick also showed its 2016 Cascada convertible, a smallish 2+2 based on an Open derived platform.  Powered by a 1.6L turbo four mated to a six-speed automatic, it’s a go for production and the first Buick open top model since the 1991 Reatta.  Quite nice.

In describing last year’s show, I mentioned the Cadillac ATS coupe and its V variant.  This year Cadillac showed its new CTS V.  It has Corvette’s Z06 LT4 engine with 640 horses hooked up to the Corvette’s new eight speed automatic transmission.  It’s said to be GM’s first ever 200-mph sedan.  Johan de Nysschen is Cadillac’s new president having been lured away from Infinity.  He handled Cadillac’s press conference with great class, but one of his first big moves is the relocation of Caddy headquarters from Detroit to Manhattan.  Didn’t Mercedes Benz just leave the Big Apple’s sky-high costs for new digs in Georgia?  I don’t get it.

Chevy’s press conference was hosted by CEO Mary Barra, of whom I am a big fan.  The daughter of a Pontiac tool and die maker, she grew up in a household steeped in all things GM and graduated from General Motors Institute in 1985 with an electrical engineering degree.  She was successful in every task assigned her on the way up the corporate ladder.  I’m told she’s smart, even-tempered, and well respected at all levels within the company.  Before she’d even warmed up her CEO seat though, she was blind sided by the ignition recall mess.  How it happened in the first place is unbelievable, a story for another day.  It is ongoing, but few can fault her handling of it.  At NAIAS, Ms. Barra left the high performance presentations to others.  She concentrated on a revamped 2016 Chevy Volt and a completely new all-electric Chevrolet Bolt on sale perhaps as a 2017 model.

The general perception of Chevy’s Volt is that it has been a major flop.  But since its introduction as a 2011 model through the end of 2014, over 70,000 have been sold and owner satisfaction is sky-high.  Counting the Holden Volt and Vauxhall Ampera, Volt derivatives built for overseas markets, sales will soon top 100,000.  Not huge numbers—2014 Stingray production was 37,288 alone—but not nothing.  Rather than bail, GM is doubling down. The new Volt is a slightly more efficient, more mainstream version of the original.  With all the emphasis on the Volt’s weight management, it escaped me that the first’s 1.4L four-cylinder engine-generator had an iron block.  That’s been rectified with a new aluminum block 1.5L four.  The new car is slightly bigger in all dimensions except height.  Overall weight is down by about 250 pounds.  A little less heft, a little more battery efficiency, and general electronic tweaking results in a battery-only range increase from around 37 miles to a claimed 50.  That should play well with current Volt owners who overwhelmingly use their cars as GM engineers envisioned...an electric with a “range extender” emergency gas-powered generator on board.  Volt owners drive over 90% of their miles on battery alone.

Based on the Cruise platform, the first Volt nonetheless had a unique look, especially inside.  The revised car is much more conventional in and out.  It’s still a four-door hatch, but the rear is less abrupt and the extra glass in the hatch is gone.  As a diehard manual-shift dinosaur, I have no interest in owning an electric or hybrid, but I do find the technology fascinating and try to stay up.  I keep asking myself where we’ll be ten or twenty years out.  My best guess is that tomorrow’s fleet will still be dominated by internal combustion, but all with some degree of hybrid assist.  Conceptually, the Volt makes a lot of sense.  Its drawback is having to drag the weight of a conventional four-cylinder engine around while in pure electric mode.  But as new iterations continue reducing weight and increasing battery oomph, it still might evolve as the dominant configuration.

The big mystery is full electric.  Part of me thinks Elon Musk and Tesla will ultimately flame out.  But Wall Street’s Tesla market valuation certainly doesn’t agree.  And there’s no question that Tesla’s model S is one terrific automobile regardless of its power source.  Tesla’s next model will be an expensive sport utility called the Model X, but Tesla will live or die with its mainstream Model 3, pegged at $35,000 with a 200 mile range.  All of this is why Mary Barra’s introduction of the Bolt was big news.

GM aims to beat Mr. Musk to that $30K, 200-mile range market with the Bolt.  Customer demand?  Competitive juices?  No.  Two things are in play here.  First is the Obama Administration’s 54.5 mpg requirement by 2025.  The target is bogus, of course, just a political brag line.  What’s built into the target is over-inflated credits for electric vehicles.  Essentially, if a manufacturer can figure out how to sell a sufficient number of electrics, it can continue to sell higher profit vehicles that don’t come close to hitting the target.  Second is California which has an escalating zero-emission protocol in place that requires manufacturers to sell an ever increasing percentage of zero-emission vehicles in order to do business there.  Falling short means buying “credits” from companies like Tesla which earns excess credits since its fleet is 100% zero emission.  The loot Tesla rakes in from these credits and Government subsidies are critical elements of its success story.  Rumors have floated that GM would solve its California requirements by simply buying Tesla, but that won’t happen with Tesla’s stock price so bloated.  Short term, GM electrified the Chevy Spark.  Longer term, the Bolt will help address these dual mandates.

Getting back to the show floor, the long awaited Acura NSX finally arrived in production form.  This one’s hard to figure.  Mostly aluminum space frame and aluminum body panels.  Mid-engine, twin-turbo, V6, 9-speed dual clutch automatic transaxle.  Okay so far (I’ve given up griping about the demise of manuals).  But stir in three big electric motors, one between the engine and gearbox, and one at each front wheel.  Enough engineering for several cars.  Ditto the exterior.  As Robert Cumberford said in his NSX design analysis for Automobile Magazine, a mid-engine layout dictates excellent proportions for a two seat sports car.  “It’s very hard to screw up, but Acura has managed it.”  Low and sleek with a gorgeous profile, yes.  But way to many design elements, scoops, and textures.  Honda generally builds great driving cars, but their styling has been lackluster for years.  Probably doesn’t matter much for bread and butter Accords and Civics–just play it safe–but it has torpedoed its luxury Acura brand.  Hondas are probably better built across the board than Kia, but look at what Peter Schreyer, formerly chief of Audi design, has done for Kia’s stying...and sales.  The NSX has been so anxiously awaited for so long, I suppose it will sell even at its projected $150,000.  But it could have been so much better.

The standouts of the 2015 NAIAS had a high performance glow led by the Ford GT, but the underlying theme was the autonomous, or self-driving car.  Everyone, including GM, is nibbling around the edges with self parking and the like.  But Mercedes Benz showed what it thinks driverless cars will look like down the road with its F015 Luxury in Motion concept.  As we charged toward the moon during the sixties, it was logical to believe we’d be exploring out into our solar system in short order.  Think of the movie, 2001 A Space Odyssey, made in 1968.  But it was not to be.  Today we pay the Russians to ferry our astronauts to the International Space Station in decades old technology.

One can only hope a similar fate awaits the F015 and its ilk.