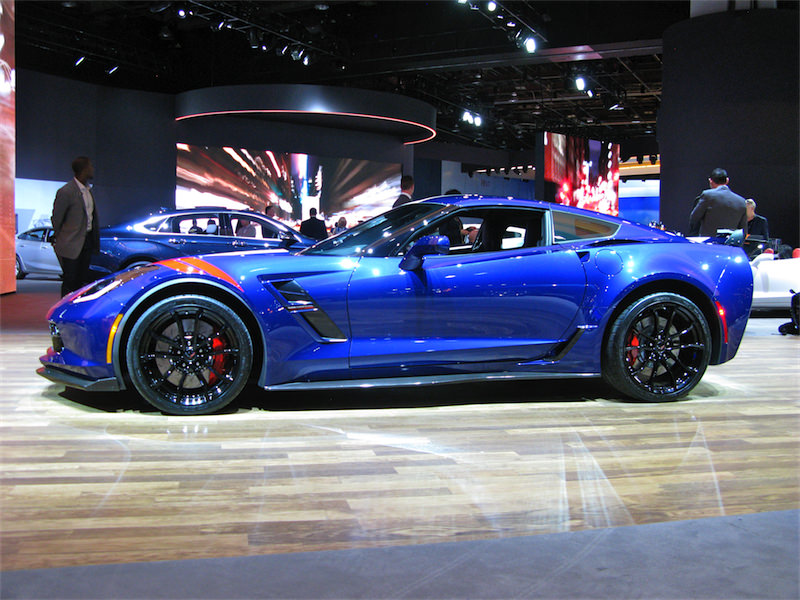 Detroit’s North American International Auto Show is an early January affair, but I tend to let several weeks go by before putting fingers to keyboard.  This year I suffered severe writer’s block. That once meant  staring at a blank sheet of paper in the typewriter.  Now, a blank screen.  Was it just me?  After more than two decades of attending this event, had I become jaded?  I’ve entered my seventh decade of planet residence.  Age?

Then my March issue of Road&Track arrived and, as always, I turned to the last page to read Bob Lutz’s column.  In the auto exec ranks, Mr. Lutz is my favorite.  I’ve followed his career since the Chrysler days when he should have followed Iacocco as president (Lee today admits that blocking Lutz’s path was the biggest mistake of his career).  Before GM went down in bankruptcy flames, Lutz was working magic with GM’s product line.  Ironic that a crisis fueled by sub-prime mortgages brought down two of our three iconic auto giants.  I believe GM under Rick Wagoner with Lutz’s help could have pulled GM through despite its legacy cost burdens.  Messy as it all was, it appears the General is still Lutz’s current favorite manufacturer.

Mr. Lutz started his R&T March column thus:  “I remember, early in my career, the excitement of the Detroit auto show.  The anticipation, the adrenaline, wondering who would unveil what.  But like Christmas, the Detroit show is starting to feel routine and predictable.  Is it just me?  Jaded?  Too old to get it?

Good.  Not just me.  Walking into the show, I had great expectations.  Many manufacturers had new locations.  A revised floor layout and lots of new fixtures held great promise.  My associate Gary Lisk and I always do a quick walk through before planning our photo schedule around press conferences we want to attend.  Tour complete, we just looked at each other.  There have been years we needed two full days to complete the mission.  This year we wrapped it up by mid-afternoon of day one.

It wasn’t the host’s fault.  Cobo Hall looked better than ever, and downtown Detroit is coming back to life.  Guest parking during media days has become impossible in the immediate Cobo area, so we parked at Greektown and rode the elevated tram right to Cobo’s show entrance.  Smooth as silk.

To be fair, the show wasn’t a total bust, just disappointing in the number of new reveals and one-off show-stopper concepts.  New this year mostly meant crossover SUVs.  Yes, they’re driving the market, but jeez.  And self driving technology just doesn’t translate to visual excitement.

Corvettes displayed, though not new reveals, shined nonetheless.  First, an Arctic White 2LT Stingray convertible with several GM dealer accessories.  These included rear spoiler with wicker, carbon fiber rockers and front splitter, and black machine-face wheels.  Second, an Admiral Blue Metallic Grand Sport coupe. It had the Heritage Package, optional black Grand Sport wheels, and competition seats.  Unlike the 2016 show when detail prep was spotty, these Corvettes were meticulously prepared and drew plenty of attention.  Nearby were a Nightfall Gray Camaro SS with the 50th anniversary package, and a Camaro ZL1 featuring an aluminum hood with carbon fiber insert and Recaro seats.  The ZL1 had the “flowtie” grill emblem, Chevy’s bowtie with the center removed to sneak in a few extra cubes of air.

Although Chevy’s pure electric Bolt debuted at the previous NAIAS, it was not eligible for 2016 North American Car of the Year as it was not yet in production.  It is now and it was 2017’s easy winner.  Truck of the year went to the Honda Ridgeline, and utility vehicle to the Chrysler Pacifica not-so-mini van.  Let’s look briefly at each in reverse order.

Chrysler continually brings up the rear in domestic quality surveys, but to my eyes their product designs are a cut above.  The Pacifica is big, but very nice.  Chrysler recently unveiled a Pacifica Hybrid, the first such in the minivan segment.  Think of it as a 5,000 pound Chevy Volt with more utility.  Like the Volt, it has a plug-in chargeable 16-kWh battery.  Pure electric range is 32 miles, less than the new Volt’s 53, but better than other vehicles similarly configured, not far off the first-gen Volt’s 38 miles.  EPA rates it at 84 MPG-e compared to the new Volt’s 106 MGP-e.  The Pacifica’s extra cost of roughly $2,000 is easily justified.  Plus, it qualifies for the $7,500 federal tax rebate.

Honda’s Ridgeline is growing on me.  I often see a black one mornings at my rural post office and have chatted with the owner, a gent who traded in an older Ridgeline.  He was happy with the old one, and absolutely loves the new.  He’s not a heavy duty trucker, just the occasional trip to Loew’s for landscaping supplies and such.  Says the Ridgeline is as comfortable as any car he’s owned.  So for the right buyer, the Ridgeline makes sense.  I’ve read magazine reviews criticizing Honda’s design decision to give the sheetmetal more of a body-on-frame truck look even though it’s unibody.  I just think it looks better than its predecessor.

Chevy Bolts built so far have mostly gone to California, Oregon or GM’s Maven ride sharing program.  Availability will be phased in to other states throughout the year as GM takes a cautious ramp-up strategy.  This thing has gotten universally positive reviews and I thought Chevy would open the production spigots a bit wider to take advantage of the head start they have on Tesla’s Model 3, due to begin deliveries later this year.  Then again, a lot of analysts don’t think Tesla will meet its promised delivery schedule.  Time will tell.

Speaking of Mr. Musk’s baby, Tesla skipped Detroit’s NAIAS for the second year in a row.  The big Tesla news, aside from the upcoming Model 3, is that Tesla’s stock market valuation exceeded that of both Ford and GM earlier this year.  How can this be?  GM is solidly profitable and its 2016 volume was forty times that of Tesla which has yet to make a dime.  Here I again defer to Bob Lutz who responded to a Road&Track reader by saying “...a company is either cool and cutting edge, or it’s boringly traditional.  Tesla, the world’s biggest cash incinerator, is the former and has a stratospheric stock price, unhinged from financial reality.”  GM’s stock price bounces around its IPO price of $33 per share despite solid profits in every year since emerging from bankruptcy.  There was that ignition switch fiasco, but still...

Now to the show’s other highlights, sparse as they may be.  Cadillac showed the Escala concept, its latest vision of what a future big Caddy could look like.  Understated elegance.  Lexus showed its LC500, an edgy, beautiful coupe.  Its “we’ll do Audi one better” humongous grill looks horrible on some models, but it works here.  The Nissan V Motion 2.0 suicide door concept was even swoopier, but not production possible.

Everyone should have a Miata in their garage at some point and Mazda has just built a new retractable hardtop model, the RF, that pushes the right buttons for me.  It’s a new look for Mazda with flying buttresses ala GM late sixties that compromises rear vision, but is so well executed.

Regardless of this show’s letdowns, I’m staying positive and looking forward to next year.